CREATING A PSYCHIC BOND WITH YOUR PET

After many years of working with many varied clients in all kinds of situations I have recently been approached to work with animals, it seems quite bizarre really that I have not followed through on this before with my intuitiveness but it could be to do with the fact that I put so much energy and involvement into working with the human race in my busy life that that I have just simply let it pass me by.

My early childhood and into my teenage years  was spent on a Friesian Dairy Farm in the countryside of England  so was surrounded by herds of cattle, sheep and horses from an early age, I was shown how to milk a cow at 4 years of age and seemed to be quite competent and was paid in coins by the farmhands… I learnt quickly not to spill it and the cows seemed happy as I seemed to have no fear of being kicked or pushed over off my tiny milking stool.

I now understand that pets do demonstrate their psychic bond with us and do have a psychic 6th sense of knowing and communication,we lived in a house in Surrey in the UK before leaving for Australia and all 4 houses around and opposite us were burgled over a period of 4 months, we didn’t have an alarm system then and I was out all day in London and travelling overseas  during the week so we were easy targets, however we seemed to be surrounded by large black crows that came from the wood in the back garden, sitting on the rooftop and circling overhead on a regular basis, it probably helped that I left crusty bread on the bird table as an incentive but I always felt we were the house that was protected, even the local police  visited us and said we were lucky, can’t believe I didn’t worry but it never seemed to concern me.I left my handbag by mistake on the bonnet of the car while I went inside and when I came back an hour later somebody had emptied my whole bag and displayed on the driveway including coins in my purse and nothing was gone, it was like everything had been put in a’bubble’ and nobody could see it.

We have seen the reaction of dogs and cats when illness is around, the incessant need to be with the sick owner as companionship or in some cases hiding away. I had an operation 5 years ago on my foot and was lying with my foot  resting as I was on crutches, I felt fine although tired, my Blue Russian cat sat and continually sniffed the bandage staring at me,it went through my mind that she was smelling infection through all the dressings, within 24 hours I couldn’t put my foot down and a severe infection was diagnosed.

I spoke with a client in Chile a few months ago who booked a consultation with me because she suspected she had breast cancer, she had found lump in her left breast and was waiting for the diagnosis, I told her the tumour was benign and this was I suspected the 3rd time, she confirmed it was the third lump and had a history of these symptoms, Catalina also said that prior to this third lump been found her new cat was constantly wanting to sit on her lap purring deeply, to such a point she had to put him outside while she cooked and did housework, now he is acting normally and she suspects he felt changes in her body. 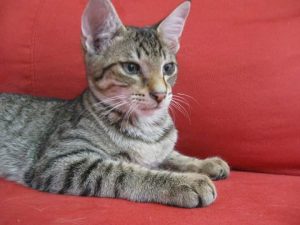 Last year one of my friends cats here in Melbourne went missing while she was based overseas, obviously she was very traumatised as the house sitters were, they looked continually and called vets and rescue centres but no news, she asked me in a call to me from London outright so I connected that he had sat on a chair on warm days in the sun, she confirmed that he felt the chill as he was quite elderly and loved the morning sun, I saw him jump  off the chair and walk away, he seemed to be walking in clusters of very thick grass near water this she confirmed was inclines of rough grass verges near where they lived rurally and there was streams of water that ran through, he seemed to be near some form of water waste overflow and I felt him go in there to rest, he had passed, he had just jumped off the chair to go on his journey.

My own Siamese cat Taschi died last July while I was in the UK we had had a formidable bond as I rescued him from cat protection in Perth the day before they were going to euthanise him,  I always felt he had know this and during my incredible time of homesickness  on first moving to Australia he was a huge support, the last time I saw hm on my bed before I departed for the airport I went back there times to say goodbye we looked back each other and I told him ‘not to go anywhere’ he gave me one last meow and  we both knew he would and in a way he spared me the final goodbye, my clients still ask about him and I feel his presence , he talked to me many times and I miss our conversations.

To connect with an animal is a wonderful opportunity to have, they all have have souls just like us and I am sure as much knowledge, they touch our lives, leave memorable times and are around in spirit if we call them.